The Edmonton Kennel Club was formed in 1910 by a group of local dog fanciers. The first president was Mr. Charles May, the mayor of Edmonton at the time. Club meetings were held in the Council Chambers of the Civic Building. Educational talks were presented by members on their particular breed. Some of the breeds owned by members in those days were Bulldogs, Airedale Terriers, Wire-Haired and Smooth Fox Terriers, Scottish Terriers, Irish Terriers, Cocker Spaniels, Labradors, Flat-coated and Curly-coat Retrievers, Pomeranians, and Poodles.

Wally Jacob, EKC Life member, Conformation Judge and CKC board member, with one of his fine Boxers. Their kennel was also well known for Kerry Blue Terriers.

Joe Caswell, one of EKC’s founding members, with some of his Curly Coated Retrievers in 1913. 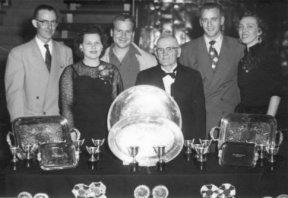 1954 Trophy Table with Marg and Wally Jacob, 2nd and 3rd from left. Marg and Wally were instrumental in the shows and events of the Club for decades.

Prizes were often donated by local merchants. Among those listed are phonograph records, lamps, fishing rod, dog collar, travelling rug, 10 gallons of gasoline, and flashlights, as well as silver trophies and gold medallions.

In the early years, the Edmonton Kennel Club shows raised funds for various good causes: Junior Hospital League charities and overseas war comforts. In 1946 and 1947, 50% of proceeds were devoted to comforts for hospitalized war veterans.

The judge was Mr. George Kynoch of Winnipeg. Breed entries for this show were: